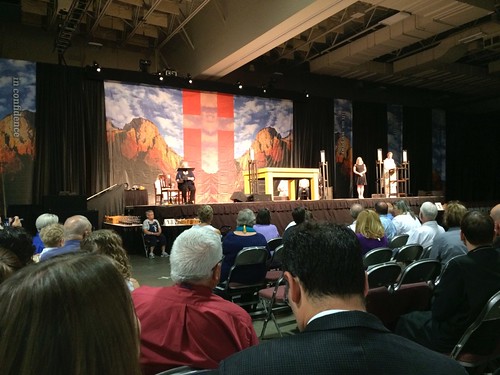 This morning, as General Convention was gearing itself up for a joint session featuring small group discussions of structural change, word came down from the Supreme Court that the justices had overturned the Sixth Circuit Court’s decision and thereby affirmed that the Constitution gives same-sex couples the right to marry. Not surprisingly, when I arrived at General Convention for worship this morning, there was a great deal of rejoicing, including singing “we are marching in the light of God” during the prelude. Somewhat surprisingly, The Rev. Gay Jennings (President of the House of Deputies) did not directly mention the ruling at all during her sermon. Perhaps that was fitting, as there are still a number of members of our church who are not yet ready to rejoice in this ruling.

Somewhat jarringly, the next thing on the calendar was the brief formal nomination of the candidates for Presiding Bishop followed by a lengthy small group discussion on structure. Somewhat surreal that as much of the rest of the country is either rejoicing or wrestling with the Supreme Court’s ruling, we’re buried in a large conference room talking about structure. Granted, that structure can facilitate ministry, but it is an odd juxtaposition.

This afternoon we will return to legislative committee meetings that will (presumably) report to the House of Deputies and/or the House of Bishops regarding various resolutions, with a recommendation to adopt, reject, or something in between (discharge as already taken care of, refer to another committee, etc…). It is extremely likely that the Special Legislative Committee on Marriage (on which our Deputation Co-Chair Jeff Diehl sits) will engage in vigorous testimony and discussion on various issues surrounding same-sex marriage, including a revision of the Marriage Canon. Stay tuned, it should be an interesting legislative session later today.