Space is big. You just won’t believe how vastly, hugely, mind- bogglingly big it is. I mean, you may think it’s a long way down the road to the chemist’s, but that’s just peanuts to space.
— Douglas Adams, The Hitchhiker’s Guide to the Galaxy

One of the great things about being at General Convention is that it reminds you how large The Episcopal Church, as a whole, is. No, we don’t have the members that the Roman Catholics or the Lutherans do, but when one hangs around one’s own parish and diocese for long enough, one sort of forgets that there are over seven thousand congregations with a total of over two million people active in those congregations. Though there is plenty of news from the wider church available, it is very easy to get focused on parish and diocesan business and forget that there are millions of other people doing the exact same thing. 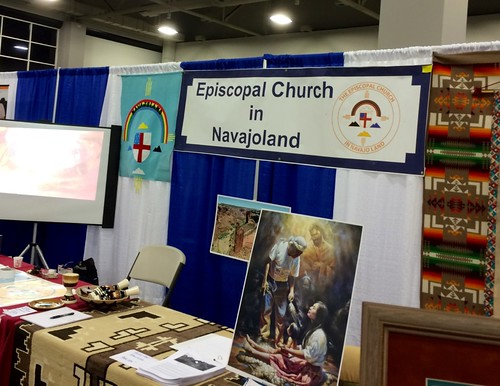 Here at General Convention, you get much more of a sense of the length and breadth, as it were, of The Episcopal Church. You meet people from Honduras (as I did the first night meeting the bishop and deputation over dinner) to Virginia to Florida–sometimes within minutes of each other! It is a reminder that there is a great amount of activity and diversity in this church of ours. Hopefully, we have captured some of that for you as Katy and I have posted blog entries. Even though we have plenty going on in El Camino Real, there is a huge amount going on across the United States and in the various countries that comprise The Episcopal Church. 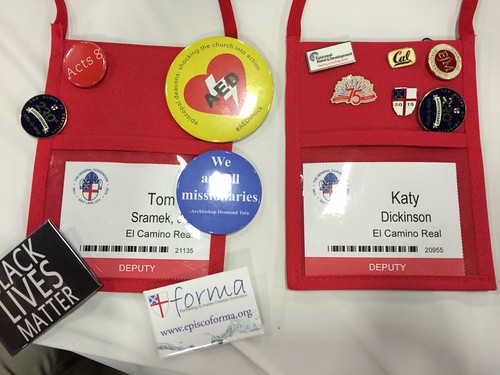 Today, since Deputies Jeff Diehl and Rob Fisher wanted to visit and view the marriage canon debate in the House of Bishops (more on that later), Katy and I got a chance to rotate in as voting deputies. As you can see, we both got a chance to speak on the floor of the House of Deputies–Katy on an interfaith education resolution and I on a church revitalization resolution (both passed). It was a lot of fun to be in the middle of everything and to be able to vote on a number of resolutions and even participate in some elections (Executive Council, Trustees of General Seminary, etc…) as well as the re-election of Byron Rushing as Vice-President of the House of Deputies. Afterwards, we got a picture with Vice-President Rushing as we left the House of Deputies (see Katy’s blog post).